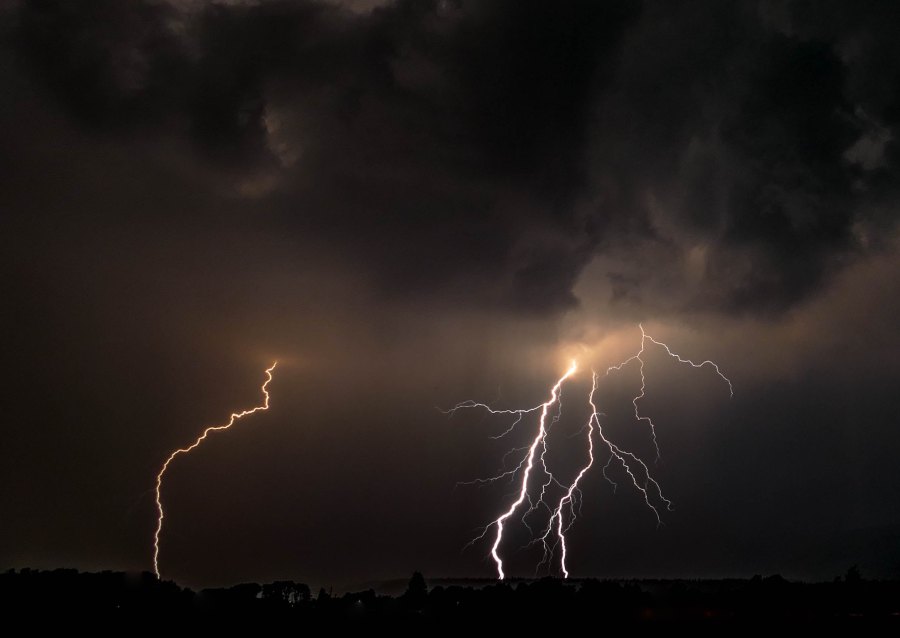 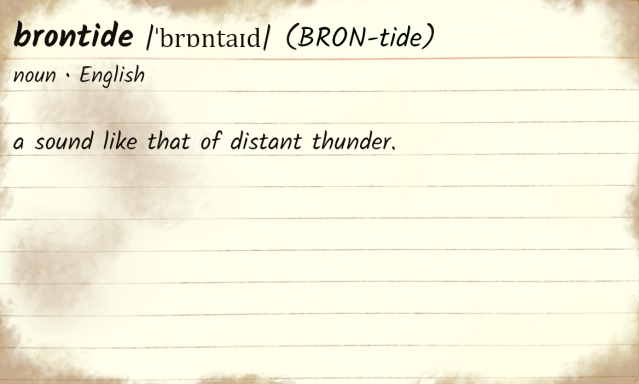 Say what you will about English, but it can be used effectively if the person using it knows what they’re doing. In terms of sheer vocabulary, English is simply a brute, having the largest number of distinct words of any language whose words are countable.* A large portion are stolen and pillaged, yes, and many more are so old, obsolete, or obscure that they’ve fallen out of use, but what’s incredible is that no two are quite the same in what they are able to express. I’m a firm believer that — at least in English — there’s no such thing as a true synonym. Even if two words have very similar meanings when taken at face value, they often have subtly different connotations that can change the meaning of what is being communicated. This makes English, when used correctly, able to express a lot of highly specific concepts very concisely, and with remarkable precision — and sometimes a word is so perfect for what it describes that it’s beautiful.

Enter brontide. I’m never disappointed to learn a new storm-related word. Storms are the embodiment of Mother Nature’s flair for the dramatic, and the words that we use to write about them are infused with that drama — so the discovery of another one to add to the arsenal is very exciting. I’m particularly captivated by this one because it so perfectly encapsulates the thing that it represents, seeming almost to describe itself. BRON-tide. It sounds like a distant rumble of thunder.

To be precise, according to Merriam-Webster, a brontide is the sound of a particular seismic phenomenon related to earth tremors. But as much as I’m usually a fan of being pedantic, I find the scope of this definition rather disappointingly limiting — brontide has so much more potential as a sound word than just that. It could describe so many things. An approaching storm. The crashing of waves on a nearby shore. A train passing in the distance. Someone snoring in the next room. One experience I remember quite vividly is spending the Fourth of July at a lake surrounded by mountains, where fireworks were being set off all around us from various locations around the lake. Each shattering boom echoed down the mountain range for miles, bouncing and reverberating in a way that truly sounded exactly like thunder, the noise hitting us from every direction. And yet, to call that noise “thunderous” somehow doesn’t do it justice. Though accurate, it lacks a certain poetry that would make it better suited to capture the magnitude and the grandeur of what it felt like to be there. Brontide seems to fit those criteria. It leaves more to the imagination, not specifically describing thunder but merely a sound like it, and managing to convey a sense of distance at the same time. It feels like it was made to describe that night in the mountains.

For such a powerful word, it makes me sad that brontide is so obscure. My computer’s dictionary doesn’t recognize it. Merriam-Webster’s website makes a point of stating that it only appears in their unabridged edition. But it’s still a relatively new word, only having appeared in English a bit before the year 2000, according to Dictionary.com. It’s still a blank slate. Its official definition may be limiting, insisting that it be tied to a specific seismic activity — but the origin of the sound isn’t really what matters. The word is for the sound itself. Going by that alone, any number of things could be considered brontides. Language is fluid, constantly evolving, defined by the way people use it. (The dictionary wouldn’t have so infuriatingly accepted the informal usage of “literally” to mean “figuratively” if that weren’t the case.) I’m hopeful that brontide can be brought out of obscurity by people who recognize what a great word it could be. I would be thrilled to use it in my own writing; in fact, I fully intend to do so until it catches on. Brontide is a word waiting to be discovered, and we have the power to make that happen. The brontide revolution starts here. We must help this little word make a noise so thunderous that it can’t be ignored.

*Counting words turns out to be a complicated, if not impossible, task. For one thing, not all languages form their words the same way. Take Turkish, for example, which can use a single word to express an entire sentence, or Chinese, which doesn’t have true “words” so much as characters that can be strung together until the desired meaning is achieved. There’s also the question of whether different meanings constitute different words (“run” has a baffling 600+ possible definitions), and how to count compound words (is “ice cream” its own word or just a combination of “ice” and “cream”?), among other factors — but all counting efforts thus far seem to agree that English takes the cake.