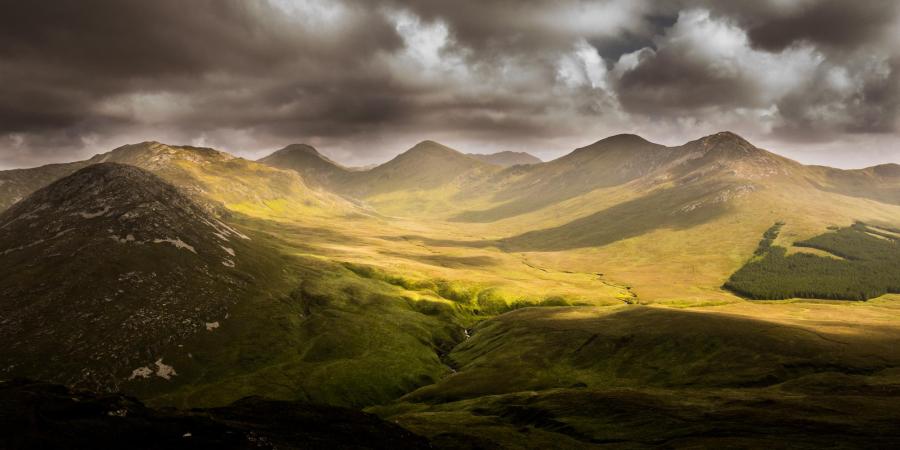 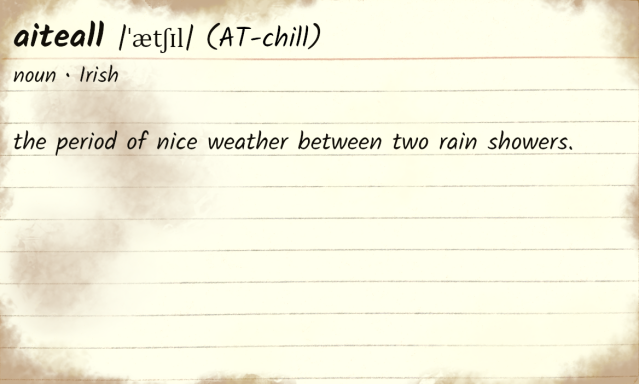 Sometimes it seems like the weather where I live is experiencing a constant identity crisis. The storms here are the most unpredictable I’ve ever seen. There will be entire weeks of continuous forecasted thunderstorms, and during those weeks there might be one day — at most — when a single distant rumble of thunder rolls through an otherwise clear afternoon. When it does choose to be stormy, the storms last either less than ten minutes or all day — there’s no in between, and you can never tell which it will be until the day is over. Rain blows in and out with such extreme suddenness that the weather forecast sometimes can’t even keep up, and my phone will try to tell me it’s sunny while outside my window it is, in fact, downpouring (or vice versa). One day just last week there was an extreme occurrence of this: within about five minutes, I looked out the window at work three times, and the view outside went from pleasant to torrential to pleasant again in that order, with absolutely no transitions in between — and no activity for the rest of the day. It was like the weather threw the world’s shortest temper tantrum.

The city where I went to college was even worse, said to average only 80 days of sunshine per year. The weather where I live now is sporadic, slipping back and forth between sunny and stormy with little rhyme or reason, but in my college town it was consistently, reliably bad. “Gray” has never been a more accurate descriptor of a place; you could go a week at a time without seeing the sun, creating the impression that you were living the same dismal day over and over again. It went beyond just “overcast”: the clouds were heavy, making the air somehow feel damp and dry at the same time, unable to decide whether it wanted to rain or not, like a sneeze that tickles your nose but refuses to either come out or go away. The weather was so bad that it was a part of the campus culture, a joke that everyone laughed about because it was all we could do. It even earned a mention in the school’s alma mater, which observes that the university lies “‘neath ever-changing skies” — the most positive thing I heard anyone say about the weather in the four years I spent there.

In my college town, glimpses of sunlight could begin to feel like rare treats during those damp gray weeks. Where I live now, you learn not to rely on the sun to stick around too long, since the appearances it makes are often sandwiched between bouts of something worse — like the eye of a hurricane, but not eerie so much as simply frustrating. (When it comes to places to live, I really know how to choose ’em.) So when I learned the word aiteall, it resonated with me on a deep and spiritual level that I didn’t know was possible for a weather word. I’ve lived this word. I don’t just know it — I feel it.

If any language would have a word like this one, I’m not surprised that it would be a Celtic one; the weather of the British Isles is famously moody. Aiteall is the spell of nice, pleasant, even beautiful weather that sometimes comes between rain showers, always lovely and welcome while it lasts, but at the same time disappointing and always too short. It can last anywhere from a few seconds — just long enough for the sun to peek out of the clouds and remind you of its presence before promptly disappearing again — to several hours, long enough to make you think that the storm has passed, making it all the more disappointing when it comes back. But what I like about aiteall is that it focuses not on the ability of the weather to be unpleasant, but rather its ability to be pleasant in spite of, even in the midst of, the unpleasantness. It feels stubbornly optimistic, which I deeply appreciate. Yeah, so maybe it’s been ugly all day, and will soon be ugly again — but look! Right now it’s sunny and warm. Isn’t that nice?

Focusing on the aiteall rather than the rain could be a useful philosophy. Life benefits from spurts of optimism, from seeking out the bright periods in between oppressive torrents of various stresses and disasters. If we can’t have sunshine all the time, if gray clouds must constantly and stubbornly linger in our skies, then counting on the occasional small breaks in those clouds is the next best thing. I’ve always told myself I wouldn’t want to live anywhere where the weather doesn’t change — where it’s always sunny, where it doesn’t snow, where the changing seasons lose the drama and beauty that make them so spectacular. After all, the few sunny days at my university were always the best ones, occasions to be celebrated, made all the more special by the ugly days we had to endure in order to get to them. The Emerald Isle may be emerald in the sunshine of the aiteall, but it wouldn’t be so radiant without the rain to help the plants grow.